Avian Flu in the USA 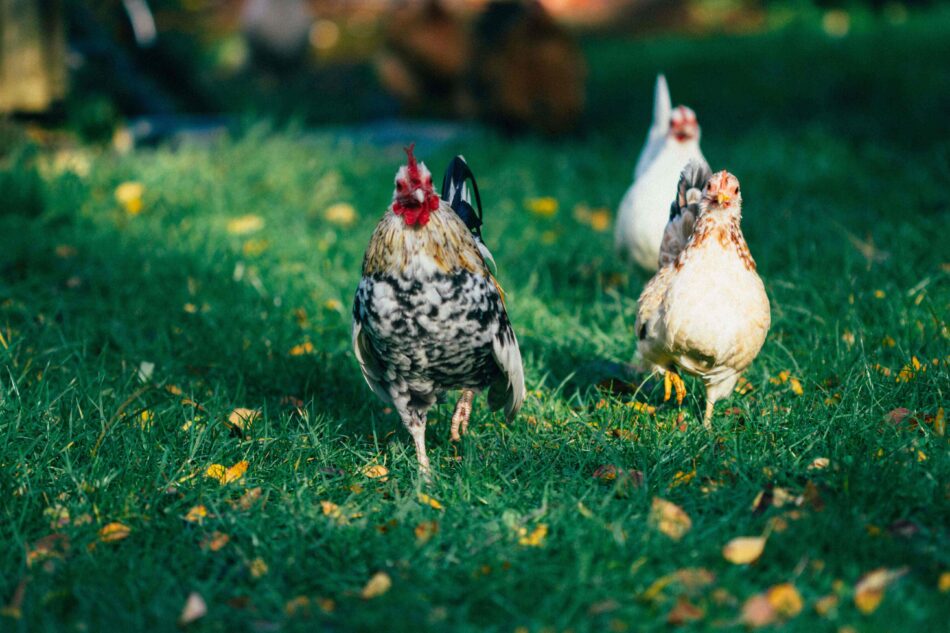 Avian flu is a headline that is grabbing the attention of American chicken-keepers. Commercial poultry farms have been aware of this virus for some time now, but backyard and small-flock raisers are beginning to wonder if they should take precautions. Is avian flu a serious threat to pet chickens?

It’s true that millions of chickens have been infected with this disease in 2022 alone. But while the headlines may seem bleak, there is a lot of misinformation out there, so choose your sources carefully. Take courage – the threat avian flu poses to backyard chicken flocks can be greatly minimized! With a few simple modifications and precautions, you can continue to enjoy caring for your chickens without dwelling on avian flu.

Chicken keepers need not stress during this time. Common sense, research from reliable sources, and a well developed plan will eliminate any doubt or fear when keeping chickens – during an avian flu outbreak or otherwise. With a deeper understanding of avian flu, you’ll be able to make more informed decisions on how to best protect your chickens from contracting the virus.

What is avian flu?

“Avian Flu”, also known as “bird flu”, are a group of avian viruses that actually date back to the early 1900s – though they wouldn’t be isolated as influenza viruses until the 1930s. Like most viruses, several different strains of bird flu have emerged over the years. Most strains of bird flu are denoted with LPAI (low pathogenic avian influenza), with the majority of birds showing little to no symptoms and having low transmission rates.

The natural hosts for avian flu are aquatic species of birds such as gulls, ducks, and geese. Since these birds are migratory, avian flu is carried throughout the world during their flights. These hosts are usually asymptomatic, or experience very mild symptoms.

The history of bird flu

The strain we are encountering today was first discovered in 1996, isolated from a goose in China. The virus’ official name became: H5N1 HPAI (highly pathogenic avian influenza). Unlike other strains of avian flu, H5N1 proved to be not only highly contagious, but also carried a high mortality rate for birds – particularly in poultry. By the end of 1997, millions of poultry lives were lost to the virus, and by 1998 the CDC had confirmed cases of bird-to-human transmission of the H5N1 Hong Kong avian flu.

Since its emergence, this strain of avian influenza has followed a pattern of laying somewhat dormant, only to re-emerge in another avian flu outbreak years later. H5N1 was first identified in the US during 2015 when it was isolated in a wild bird. During that outbreak, multiple strains of H5 avian flu viruses were in circulation.

The current avian flu outbreak in the US is from this same strain of avian influenza. Until January 2022, the US had not seen a true outbreak of H5N1 since 2016. While contracting avian flu is still considered rare in humans, millions of birds all across the US have been infected since the beginning of this year. There has only been 1 confirmed human case of avian flu in the US since H5N1’s re-emergence in 2022, and no human-to-human transmission has been reported. An easy-to-clean chicken coop will decrease human exposure to avian flu during routine coop management.

For more information, refer to the CDC’s official website for avian flu activity in the US.

Signs and symptoms of avian flu in chickens

LPAI (low pathogenic avian influenza) shows little to no symptoms in birds of all species. Some symptoms of LPAI typically involve:

However, H5N1 HPAI, the avian virus sweeping the globe currently, has much more serious symptoms and a much higher mortality rate. Migratory birds that carry the virus may be asymptomatic, but in domestic poultry such as chickens and turkeys, the symptoms are often quick to progress and as of now, nearly 100% fatal.

Symptoms of the H5N1 avian flu in chickens include:

Avian flu sometimes spreads through a flock so quickly that the only sign of infection is unexplained death. It is extremely important to remove any deceased chickens from the rest of the flock using PPE (personal protective equipment) – ideally latex gloves, an N95 mask, and a disposable covering for your clothes.

Contact your chickens’ veterinarian right away if you notice any of the above symptoms, or if you have reason to believe that a chicken has died from avian flu. Tests can be conducted to confirm infection.

How is avian flu spread?

H5N1 is spread through respiratory droplets, saliva, and in the feces of wild birds. Your chickens need to come into contact with these contaminants in order to become infected, so it’s important to have enclosed, easy to clean hen houses. While small backyard birds can in theory carry avian flu, it is most commonly carried by waterfowl such as wild ducks and geese. Since these birds are migratory, they are able to spread infections all over the US, not showing partiality between backyard flocks or commercial poultry farms.

Chickens and other poultry are flock animals, and can spread the virus to each other rapidly due to their nature. Since this variant of avian flu is highly pathogenic, it is also very contagious and can sweep through an entire flock in a matter of days.

The natural host for avian influenza is waterfowl, so exercise great caution if you also keep ducks, geese, swans, or other water-loving birds. Since they are carriers, many are asymptomatic or display minor symptoms. Waterfowl should be housed separately from chickens, with no contact between the two.

Currently, there is only supportive treatment for avian influenza viruses. Antibiotics may be given to prevent secondary infections, but are usually only used when treating LPAI viruses. HPAI viruses spread so fast and overwhelm a chicken’s immune system so quickly that there is little time for supportive therapy. Furthermore, H5N1 HPAI shows such a high mortality rate that supportive therapy is unsuccessful.

Currently, the US does not have an approved vaccine for H5N1 for use in chickens, but trials are underway to develop an effective poultry vaccine.

An ounce of prevention is worth a pound of cure

The best method of treating avian flu in your chickens is to prevent them from contracting it in the first place. Thankfully, there are many methods you can implement immediately to greatly mitigate the risk of your flock becoming infected with bird flu.

The first step should be to bring your flock in and confine them within a walk-in chicken run. Free-range chickens have the greatest risk of infection of avian flu. You should ensure that the wire of the run is small enough that wild birds cannot enter the run with your chickens.

Once you have a chicken run set up, you’ll want to take the following precautions:

How Omlet can help protect your flock from avian flu

Whether you’re setting up a quarantine coop for new chickens, or wanting to increase protection for your existing flock, Omlet products offer the peace of mind all chicken-keepers need during this worrisome time.

A quality, easy to clean chicken tractor is essential when keeping chickens – not just during an avian flu outbreak, but for every day care as well! Covered chicken feeders offer additional protection from falling contaminants and shield against aerial purusings by wild birds passing over your chickens’ area. And while your chickens are in the safety of a walk in chicken run, boredom-busting toys such as the chicken Pendant Peck Toy,  Chicken Swing or Freestanding Chicken Perch will keep their minds and bodies busy!

Avian flu is a serious illness, but with some extra caution and the right supplies, you’ll ensure your chickens are healthy and happy while this outbreak runs its course.

There have been documented cases of bird-to-human transmission of avian influenza, but it is considered rare. Since the reappearance of H5N1, only one confirmed case of avian flu in a human has been reported in the US. The individual was working directly with a commercial culling of poultry suspected to have H5N1 avian flu. Their symptoms were mild, and they have since fully recovered.

Since poultry spread the virus through their saliva, nasal secretions, and feces, humans have to come in close contact with these substances in order to become infected. An individual can become infected when the avian flu virus enters in through their nose, eyes, or mouth.

Wearing gloves and masks when interacting with sick chickens greatly reduces your risk of contracting avian flu. Wash your hands thoroughly after handling or cleaning up after your chickens, and wash your clothes promptly after handling any ill birds.

Can other pets catch bird flu?

Other mammals have had confirmed H5N1 infections. In the US, avian flu has been found in various animals such as wild foxes, bobcats, coyotes, raccoons and skunks. Domestic pets can also contract H5N1. During the 2016 avian flu outbreak, a veterinarian in New York contracted bird flu from a cat that had been infected.

To protect your other pets from avian flu, be sure to keep them away from wildlife. Healthy wild animals will run from dogs and cats, but those that are ill often have altered mental states or are too weak to run from your pet. Never allow your pet to approach a dead wild animal. If your pet comes in contact with a sick or dead wild animal or poultry, call your veterinarian to discuss next steps.

Wash your pet’s feet with soap and water after hiking or walks in areas where birds frequent. Consider keeping your pet on a leash during walks to reduce exposure potential. Monitor your pets for any unusual symptoms, and report any findings to your veterinarian promptly.

Caring for chickens during an outbreak of avian flu can be concerning, but with the proper measures in place it doesn’t have to be stressful. The more preventative actions you take, the less likely it will be for your flock to become infected with avian influenza.

Some other practical ideas to stave off avian flu include:

With planning and preparation, you’ll be able to enjoy caring for your chickens in spite of an outbreak of bird flu.

« Avian Flu Symptoms in Chickens
Transitioning Your Dog Into Winter »