Rosie’s Chicken Keeping Adventure – A Taste of the Free Ranging

Social Media Executive Rosie has been at Omlet for a year, and when she was asked by her managers if she was interested in broadening her chicken knowledge (and creating fun content for Omlet’s social media platforms) with her very own flock, she said yes straight away.

Since we last spoke to Rosie a few weeks ago, the 5 ex-caged hens have settled into their new home and are starting to discover the world outside the safety of their Eglu Cube and Walk in Chicken Run.

We let them out one nice afternoon after having had them on the run for a few weeks. They were quite hesitant at first, as if they didn’t really know what to do. But once they realized they could go and explore they absolutely loved it!

They have a few hours outside every day, and they run around on the grass, make dust baths in the borders and peck at everything. Before, we could go in and out of the run and they wouldn’t really be bothered about the door being open, but now as soon as we come to see them, they stand waiting to be let out and often try to escape between our legs. So they’ve definitely had a taste of freedom, and they love it! 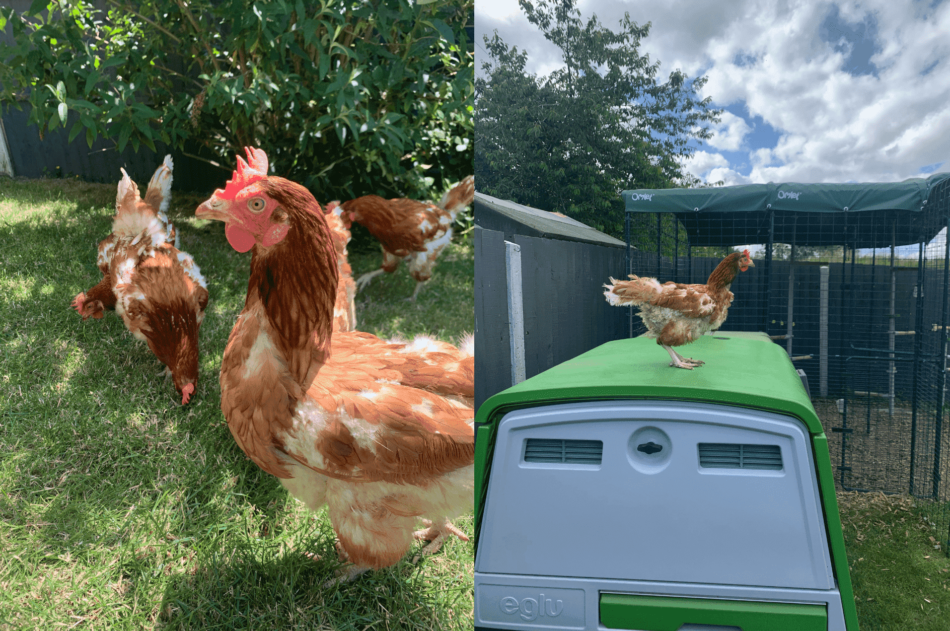 Have you had any luck with Evie the dog interacting with them?

We still keep Evie inside when the chickens are out, just because I’m not sure how she would handle it. More than anything I think she would just like to play with them, but probably a bit too rough.

We’re going to get some chicken fencing for when they are all out at the same time, to create a kind of barrier. Once they are used to each other I hope that will be fine.

What do the hens do for fun?

They use the PoleTree in the run all the time, when I come out in the morning they are already on there. They haven’t reached the highest perches yet, but they’re slowly climbing up.

So far, they haven’t been too bothered about the Freestanding Perch Tree. We have it out in the backyard, and I think they are just too busy exploring everything else when they are free ranging that they don’t want to perch. But once it’s not quite as much of a novelty it’ll be nice for them to have somewhere to perch outside the run as well.

What else has happened since we last spoke?

Their feathers are getting a lot healthier, you can really tell a difference from when we rehomed them. One of the hens has got more or less a full plumage with really shiny feathers, and she was the one that looked the worst to start with.

We’re still getting 3-5 eggs every day, so we’ve had to start giving them away to friends and family. We’re super popular guests now!

I also gave them some strawberries from the vegetable patch the other day, and they absolutely loved it – they were going crazy!

Not really a problem, but we live in quite a rural area and the neighborhood cats have definitely sniffed out the hens. We can see them sitting on the fence looking at the chickens when they are out in the garden, and there was a red kite circling over them the other day as well. I don’t know if they would actually go for them, but I’m glad they are in the Walk in Run when we’re not there though, so I know they are safe. 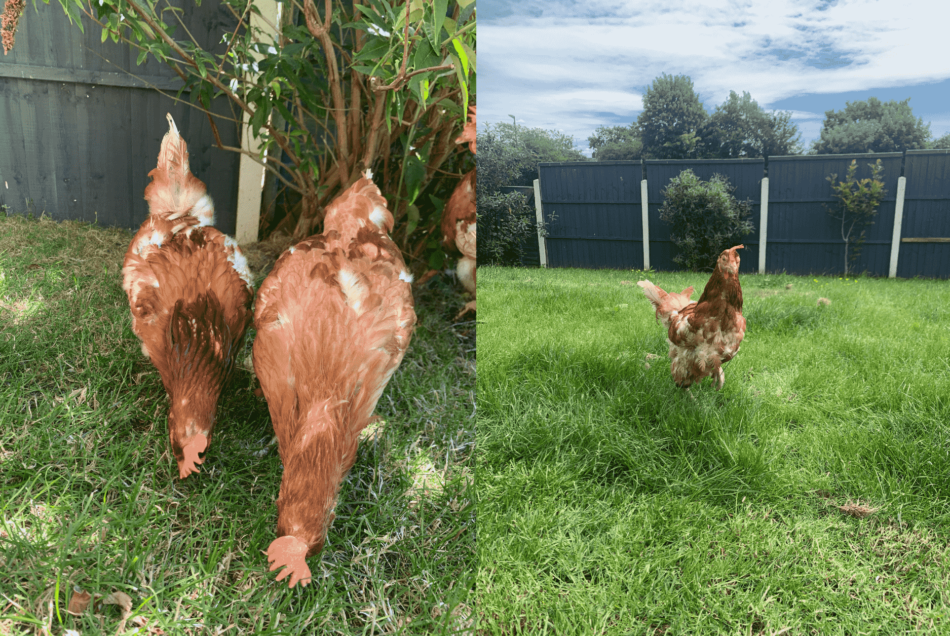