Adding Ex-Battery Hens to our Brood 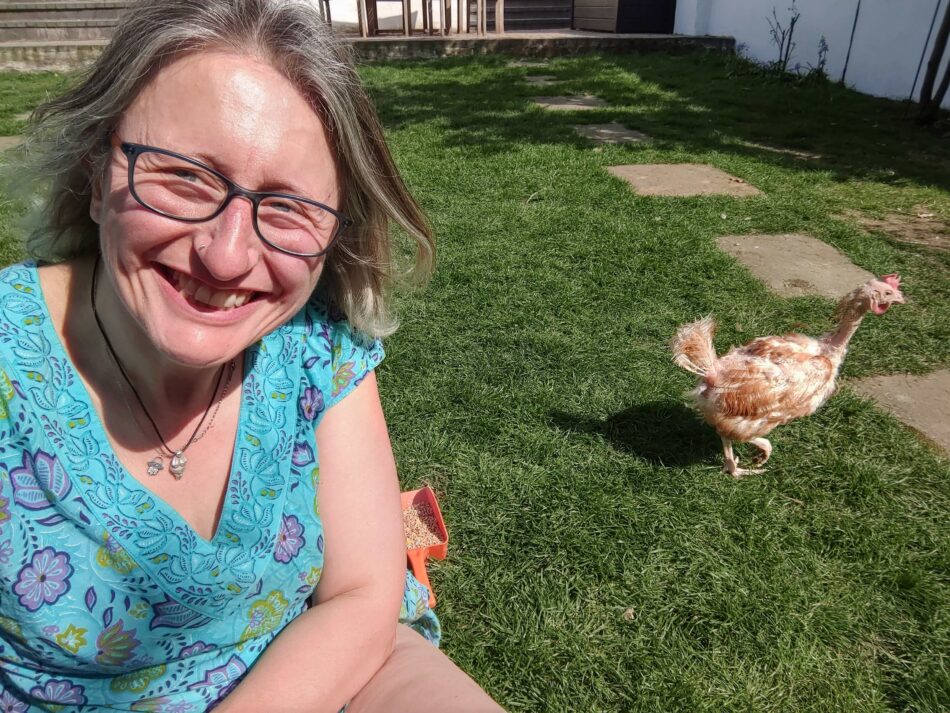 Caramel Quin and her children keep backyard hens in east London. This is their diary of introducing ex-battery hens to their older girl.

We started out with two hens and an Eglu Cube. A friend who had kept chickens for eight years needed her garden back and we’d been thinking about hen keeping, so she kindly passed them on to us. We named them Buffy and Britney (I make no apologies for brainwashing my tween kids to love late nineties pop culture).

That was just over a year ago. Buffy’s still going strong, Britney only lasted a few months. By then, we loved the girls and were already on the waiting list to collect ex-battery rescue hens from the British Hen Welfare Trust. We went as soon as possible: Buffy needed more chickens for company, or at least we did.

We drove to a nearby rehoming day and collected six birds, bringing them home in a couple of cardboard boxes. They looked sorry for themselves, skeletal, anemic. Their crests were pale and floppy. The dog, shut inside the house, pressed himself against the glass door and salivated like a cartoon hungry dog, even though they didn’t have much meat on them. The hen with fewest feathers was nicknamed Necky and looked more dinosaur than bird. The boldest was nicknamed Dora the Explorer as she sought out every nook and cranny in the garden.

A garden! It was hard to imagine that these birds had never been outdoors before. Everything was new as they exhibited natural behaviors for the first time, like scratching and pecking at the soil for bugs. We let them explore while Buffy looked on from the chicken run. Then we swapped them, and they ate while she was free range. Later we put them together in the run and watched excited as the first made it to the top of the ladder and found the Eglu.

On the first night, they didn’t all find their way upstairs to bed. A couple roosted under the Eglu Cube, so I went into the run and put them in by hand in the night. From then on, they knew where home was and made it into bed before the Autodoor closed to keep them warm and safe.

We gave them plenty of free-range time. We also doubled up on feeders and drinkers, so nobody got bullied away from dinner. The hanging feeder proved best because all seven birds could get around it at once. I swapped layers pellets for smaller layers mash for a couple of weeks because the birds were used to smaller food when they were commercially laying.

On their second day we found eggs laid randomly all over the garden, cutest was the one in the hollow of a dust bath. But within a week they had all figured out where the nest box was. Having never had more than two eggs in a day, it was a thrill to get five or six (and on one remarkable day, seven). Ex-battery hens tend to be good layers, they were bred for it after all.

On day two, I remember them freaking out when it rained: they had never experienced these tiny water bullets from the sky. Then there was a brilliant moment when I threw a handful of cherry tomatoes into the run and they dived away as if I’d lobbed a grenade into the trenches.

Bullying wasn’t as bad as I’d feared though. Buffy was outnumbered 6:1 by the newly named Willow, Betty, Mercury, Dora, Chirpy da Hen and Mango Buckbeak. (Listed in order of the age of the family member who named them… youngest last, as you can tell.) We added colored rings on their ankles early, before it was hard to tell them apart as their feathers grew back, though the feathers came in slowly because we adopted them in April. Apparently if you adopt in the winter, they get feathers faster because they need them for warmth.

Chirpy and Mango were the least feathered and most picked on, sometimes bullied away from food, but we gave them plenty of free range time so the bigger ones got out in the garden while the smaller ones ate. Gradually the bullying pecks gave way to polite pecks between all the girls, preening each other after a dust bath and freeing new feathers from their protective sheaths.

Seven months on, we still have Buffy and four of the new girls. Willow and Mercury didn’t make it: one died suddenly the other was unwell for a few days first. But we’ve also nursed others back to health: my signature banana porridge is now famous for bringing ill chickens back from death’s door.*

The star of the show is Chirpy da Hen, who I swear will live longest. She might outlive me. She gave us a scare a few months ago with a backside protrusion of epic proportions. We cleaned and examined it and were convinced it was a tumor not just a prolapse. We separated her in a pet crate so her sore bum wouldn’t get pecked by the others. We fed her banana porridge and gave her painkillers. Over a week, her bad butt gradually improved until we could miraculously pop it back in again and reintegrate her with the others. She’s fine now. No, she’s more than fine. She’s badass.

BHWT is careful to manage expectations: the lifespan of ex-batts is hard to predict. Instead, they say “your hen has at least experienced kindness outside of the commercial system which is more than she could have ever hoped for”. If you think pets are a good way for children to learn about mortality, try ex-battery hens. They’re fun, their eggs are yummy and it’s easy to feel positive about the good life you give them, no matter how long or short it is.

Ours have a great life with free range time every day. They eat well, even jump up to eat roses and fuchsias from the bushes and I don’t mind. The dog is used to them now and can go out at the same time without him acting like a cartoon hungry dog.

My luxury is upgrading to a Walk-in run with rain cover, which is as much for me as it is for the birds. I got it mostly so I can muck out the run without kneeling down. It also gives the girls plenty of space and lets the children and guests visit them any time.

We’ve gone full circle as Buffy is going through her first hard molt, she’s half bald in cold weather, while the ex-batts are nearly fully feathered. Next year we’ll probably add more ex-batts to our brood. I guess we initially got them thinking of the eggs but now it’s more than that: they’re part of the family… who just happen to lay delicious eggs.

For more information on battery hens and maybe opening up your home to some check out the ‘British Hen Welfare Trust’ for upcoming rehoming dates. 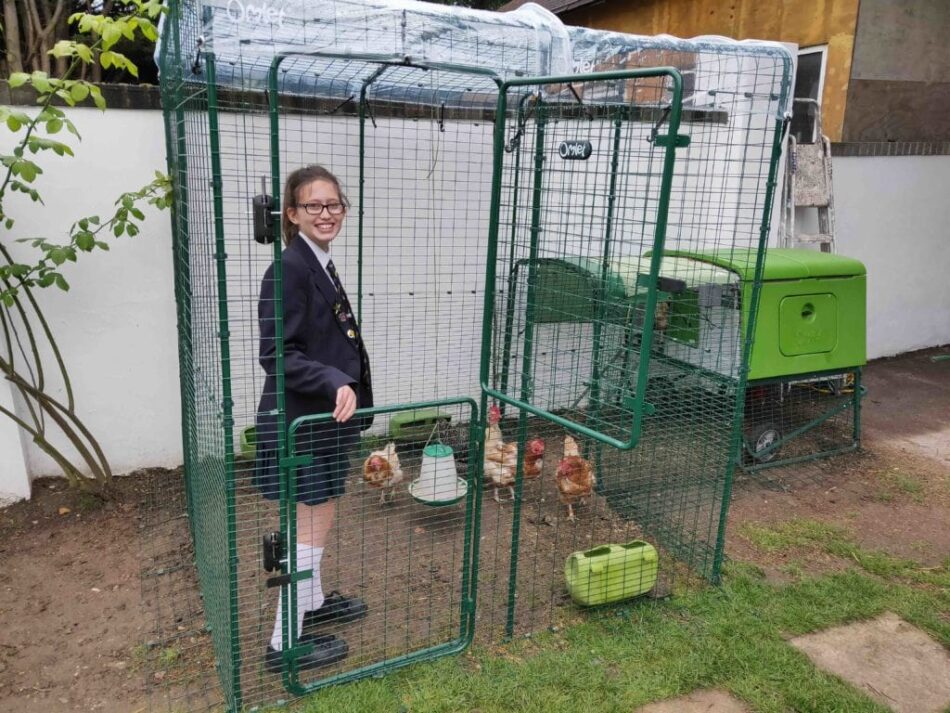 *We recommend only feeding your chickens treats occasionally. Always make their food outside of your kitchen to avoid cross contamination of food.