How to Reduce Odor from An Indoor Cat’s Litter 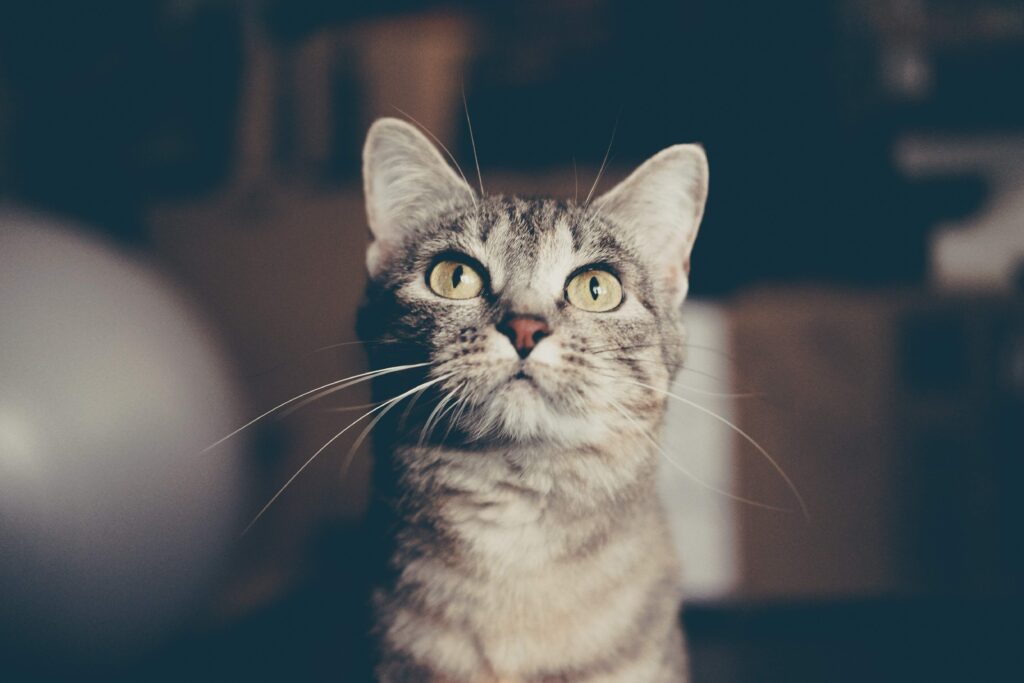 Photo by Erica Leong on Unsplash

As indoor cats frequently use their litter boxes, it is important for cat owners to take the right measures to keep litter box odors under control. Stinky cat litters, however, can be more than just an unpleasant aroma in the air around our homes. More worryingly, the smells coming from your cat’s litter box can actually be having an impact on yours and your cat’s health. However, with a few helpful tips on good litter box hygiene, you can be on your way to keeping pungent cat litter smells at bay, all while creating a healthier environment for both you and your cats.

What Causes a Stinky Litter Box?

A rancid smell from a litter box can often derive from a lack of, or poor, cleaning. Although you may be cleaning your cat litter box, if not done effectively, you may simply be masking the smell, as opposed to eliminating it.

Before anything else though, make sure that your cat is not spraying outside of their litter box, which can be one reason as to why there is an odor circulating your home. Your cat spraying outside of the litter box can be happening for a number of reasons such as boredom, territorial marking, and sickness. If you do, however, notice that your cat is simply refusing to use their litter box, the chances are, this is due to an issue surrounding the litter box itself. Some suggestions include

the litter box being dirty, (we wouldn’t like to use a dirty bathroom so why would our cats?); your cat disliking the litter you are using, based on either smell or texture (remember, cats have preferences too!); or the location of the litter box not being well suited to your cat/s.

A litter box should be placed in a quiet environment, away from the heart of the home or any outside traffic, to ensure peace and quiet. The litter box should also be separate from where your cat eats, have sufficient lighting, and within a room your cat likes or is comfortable in. The Maya Cat Litter Boxes are a great solution for cats who need complete privacy and comfort. With five different styles and entry points, your furry friend is bound to find a way to suit them.

However, if you do decide that it would benefit your cat to move their litter box to a more suitable location, which will in turn hopefully

help with the odor of the house, be mindful that cats are creatures of habit, so disturbing their space must be done with caution. Take it step by step with the litter box transition by purchasing a second box to place in the new location, while keeping the old box in its remaining place. After around a week, if your cat is using their second litter box, then feel free to remove the original, as this is a sure sign, they have comfortably made the transition. Another pro tip is to continue to use the same litter as you had before, which will make sure you’re not putting your cat under any more additional stress than need be when you replace their litter box.

Once you have ruled out that the smell is not from your cat spraying outside of their box, but in fact the odor is coming from what is going on inside of the litter box, you can begin to follow the appropriate steps to eliminate the stench and have your house smelling fresh again.

How to Control the Odor 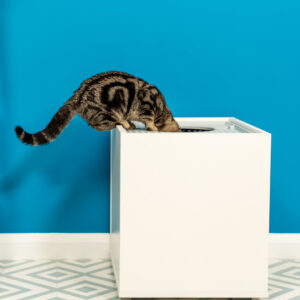 Although it may sound obvious, regularly cleaning the litter box is the starting point to waving goodbye to nasty odors. How often you give your litter box a deep clean really does depend on how often your cat is using the litter box along with other lifestyle factors such as age, diet and exercise coming into play. If you are starting to notice litter box odors becoming stronger with your current cleaning regime, up the frequency of cleaning and start giving the litter box a good scrub once a week. To wash your cat’s litter box, first remove and dispose of any litter, before beginning to scrub the box using warm water mixed with a mild dish detergent. Once cleaned, thoroughly pat dry with a towel. If you’re after an even easier cleaning solution for your litter box, have a look at litter liners, which prevent dirt from sticking to your box. The Maya Litter Box comes with a waterproof and long-lasting liner, making it simple for you to effortlessly wipe your box clean.

Keep On Top of Scooping Out the Litter Box

Scoop out your cat’s litter at least twice a day. It may initially seem a bit of an ordeal, but your cat really does prefer plenty of clean and dry space in their litter box to continue using it comfortably. Furthermore, frequently scooping the litter box means a lot less time for litter box smells to accumulate. It’s also important to replace the scoop itself, along with the litter box annually. This is because over time, the plastic scoop reacts with the acid in your cat’s urine, eventually causing the plastic to degrade and then smell.

Use a Clumping Litter

If you’re lucky enough to have more than just the one cat, we’re sure you’re more than aware of how bad litter box odors can get! We all know how bad the smell can become from one cat’s waste, let another one, two, or three…! Purchasing another litter box, however, will definitely help you to fight nasty odors. Adding another litter box will help to control the litter box smell, as the rate at which cat waste piles up will significantly reduce. The general rule of thumb is to use one litter box per cat in the household.

A cat litter deodorizer should not be used to replace correct hygiene, however they’re a fantastic way to get your cat litter smelling wonderfully clean and fresh, once all other cleaning is complete. Deodorizers can come either as granules, beads, sprays, or in powder form, with a range of different scents on the market. Alternatively, you can use a scented litter, which also comes in a number of fragrances. However, just be mindful that some cats are more sensitive to new smells than others so may not take to scented deodorizers or litters. As another option, you can go for an unscented deodorizer, which works by neutralizing odors. These will be best for cats that are more prone to irritation from strong scents.

Just like clay, charcoal, or activated carbon, is highly absorbent, making it perfect for getting rid of nasty odors. To incorporate charcoal/carbon into your routine, you can either opt for a bag of cat litter with activated charcoal or carbon or purchase a cat litter deodorizer that contains it. The Maya Cat Litter Box comes ready with an activated carbon filter, that will prevent odors from escaping the box.

If you decide that a cat litter deodorizer isn’t right for either you or your cats, using a little baking soda is another sure way to help with the odors coming from your cat litter box, although it may sound like an unlikely fix. Not only is baking soda a completely natural, safe, and pet friendly option for your cats, but it can also be used on any type of cat litter, working by absorbing your cat’s urine. A little baking soda goes a long way, so you will only need a couple of teaspoons, even for a large cat’s litter.

Dangers of a Dirty Litter Box

Dangers of a Smelly Litter Box to Humans 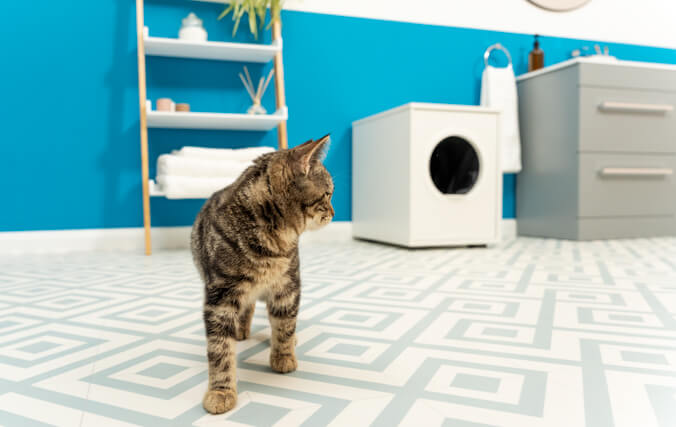 Ammonia is the most likely culprit for litter box odors, found in approximately 0.5 percent of your cat’s urine. As the litter box continues to accumulate waste within a room in your house that may not necessarily be well ventilated, the harmful gas of ammonia is formed. Overexposure to ammonia can result in queasiness and headaches, but should it become more serious, it can further lead to pneumonia. For those with a compromised immune system or are pregnant, overexposure to ammonia can be the onset of toxoplasmosis, an infection by the parasite toxoplasma gondii, which can become life threatening.

Cat scratch fever, or cat scratch disease, is a bacterial infection from Bartonella henselae bacteria, associated with cat feces. Although very rare, the disease can again cause dangerous symptoms such as fatigue, swollen glands and fever.

Dangers of a Smelly Litter Box to Cats

Cats really are clean animals, which means that many will only use a clean litter box, often resulting in cats doing all they can to avoid using a dirty one, even if it means uncomfortably holding in their urine. However, delaying using the bathroom is not a great idea for cats as it can cause urinary tract diseases such as bladder inflammation and kidney blockage, or failure. Although all of which can be treated by your vet, prevention is always better than the cure.

Cats can also unfortunately fall victim to cat scratch fever. Their symptoms are similar to those that we can suffer, with swollen glands, fatigue, and a lack of appetite being the most common.

Having a cat should not mean having to compromise on the smell of your home. Although the unpleasant odor from a litter box can be overwhelming at times, it doesn’t have to remain that way. Hopefully with a bit of advice, you can now be one step closer to saying goodbye to cat litter odors for good.

« Why Is Vitamin C So Important for Guinea Pigs?
Rabbits and Digging »