Pride of Omlet: The Constant Companion 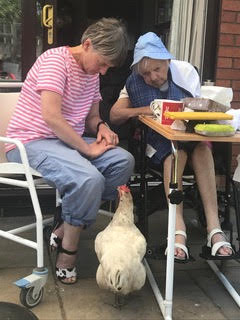 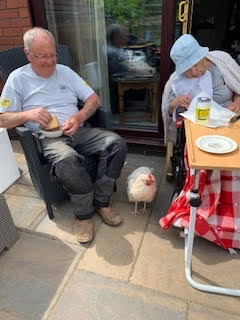 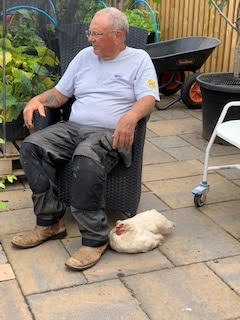 Martha’s humans, Nicola and Ben, bought chickens to bring joy to Julia, their mother who they cared for at home. The family could never have imagined that a chicken would become a caring companion to Julia in the advanced stages of dementia.

Julia used to have chickens as a child. She fondly told Nicola stories about dressing up the chickens and wheeling them around the garden, like babies in her toy stroller. However, it wasn’t until her 90th birthday that Julia actually owned chickens again. It was a dream come true. 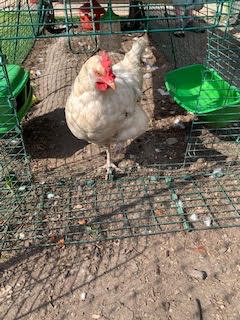 Nicola and Ben always thought they didn’t have enough space in their bungalow garden, but while visiting relatives in Ireland, Ben saw an Omlet ad and brought it home to show Nicola. “That’s just what we need,” she said. The Eglu arrived soon after, and then their two hybrid chickens moved in. Julia named them Martha and Mary.

While Mary was always shy and kept her distance. From day one Martha ran to Julia, Nicola’s mum. “She was mom’s best friend from the beginning,” says Nicola.

Unfortunately, Mary died and then there was a near miss for Martha. Like most people, the family liked to let their hens roam free in the backyard for a bit, but one day a fox came into the garden and attacked Martha. Nicola and Ben heard her squawking and went to the window. The fox saw them and ran, leaving poor Martha very shaken and suffering from a broken wing. Martha was brave though, and luckily the wing has completely healed. Now Ben and Nicola have extended the run so the chickens only come out when they are present in the garden.

When it was sunny, Julia liked to sit outside in the sun watching Martha. Julia had to use a wheelchair, and Martha would jump (in a very ladylike way) onto the footrest to warm her feet. Last Summer when Julia could no longer speak in sentences, she’d make gentle noises and Martha would answer back. She’d sit for hours by the wheelchair with Julia, having quiet conversations.

Nicola couldn’t deny Martha had a human quality. She didn’t just come for crumbs because she was there when there weren’t any. Martha cared.

“She went from a chicken, running around the garden then in those moments with mom, it was like she knew. It was beautiful.”

Nicola began to trust Martha to squawk loudly if something was wrong. When she went into the house to make a cup of tea, she’d leave Julia in the garden with Martha.

“It was weird,” says Nicola “ Martha would squawk, and I’d go out to find Mom had dropped something, or something had fallen off the table, or Mom was confused because she didn’t remember where I was.” 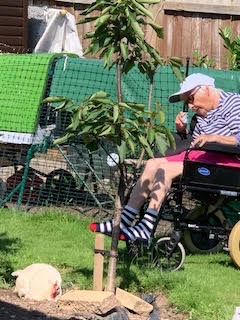 Martha was the thing that made Julia smile every time, and her eggs brought so much joy to Julia in the advanced stages of dementia. Boiled was her favorite, and Martha would let them all know when it was ready to be collected. When Martha lays an egg, she stands at the edge of the run and squawks and squawks as if to say, “Come and get my egg!”

Julia loved holding Martha’s warm eggs. Once, when Julia was having a nap, Nicola took her the freshly laid egg. She’d just woken up, and a big smile spread across her face, then she fell asleep again holding it. A couple of hours later, Nicola went to wake her up. Julia sat up. All of a sudden, the egg rolled out from behind her as if she’d laid it on the bed. Incredibly it was completely intact. “Are you laying eggs now?” asked Nicola. Julia understood, and that made them all laugh. It was the happiest occasion, just an egg rolling along the sheet. Julia kept the egg in her hand for the rest of the day. Moments like that are precious memories to Nicola and Ben.

Sadly, Julia died in September. When Julia was alive, it was Mom and Martha, Nicola says. She never thought she’d make a connection with chickens. However, having seen how Martha cared, chickens have become constant companions.

“ I think we’ll probably always have chickens because they get under your skin. Well, no, that’s a bad expression. They become part of you. They’re like a little family.” 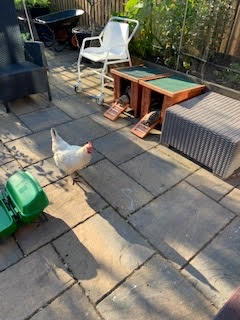 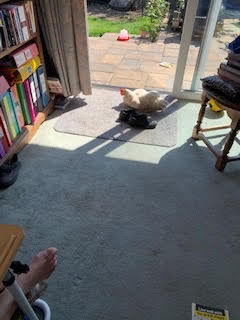 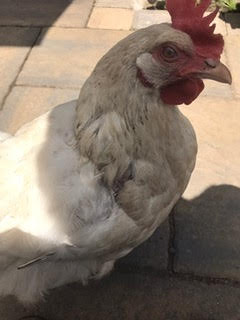 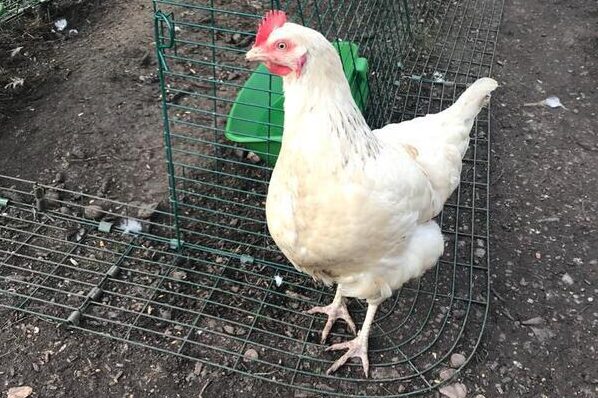 « How to Understand the Language of Guinea Pigs
Why Chickens Are the Ultimate Anti-Waste Weapon! »