How to calm an aggressive cockerel?

Cockerels have three main purposes in a flock of chickens. They protect the hens by warning of any danger, they enable you to breed your own chicks, and they look fabulous. Sometimes, however, the cockerel’s protective instincts becomes a problem, and the bird becomes over-aggressive. This can be a particular issue in the spring, which is the breeding season. 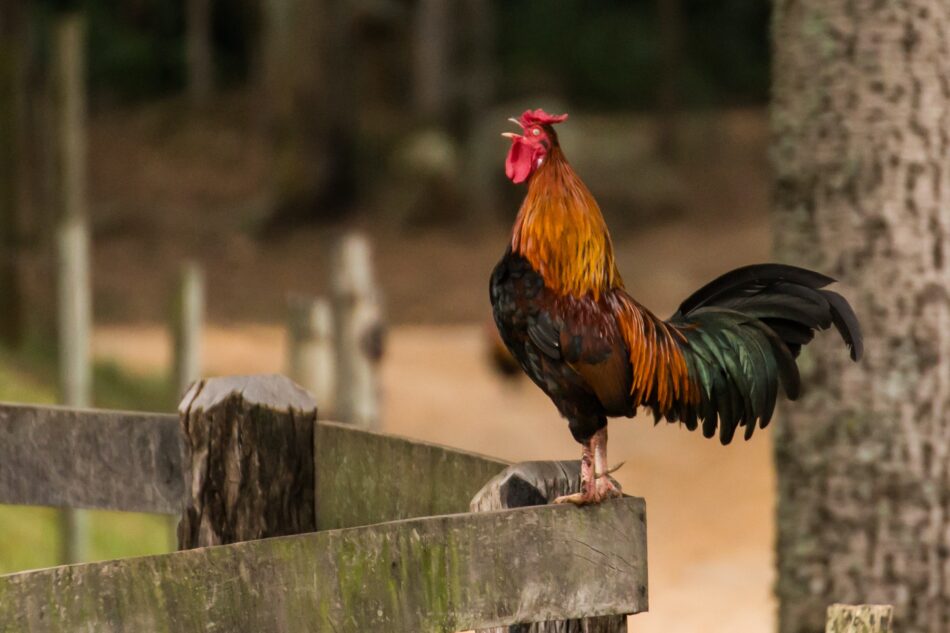 Cockerels are wired to protect their hens. If you watch the flock foraging in a garden, the loud clucking of a hen will bring the cockerel running to make sure everything’s okay. If a hen squawks when you pick her up, the cockerel will put on an aggressive display until you put her down again. As long as this doesn’t involve physical attacks, there’s no problem. Some cockerels will physically attack, though.

If these face-offs continue, the cockerel might decide that you – and all humans – represent danger and will try to fight you off at all times. Luckily, you can usually defuse the situation.

Cockerels give warning of their intention to attack. They lower their heads and perform a strutting dance while looking straight at you. Things get trickier if the cockerel decides to run up and attack your legs, like an angry farmyard goose. If you’re walking away, the cockerel may chase you from the yard, and that can cause nasty surprises too.

How Do You Stop a Rooster From Attacking You?

How to Handle an Aggressive Cockerel

Never respond to an angry cockerel with violence.

This will have no positive effect on the cockerel or flock’s behaviour afterwards, and it can result in serious injury to the bird. He may be aggressive, but a cockerel is still a bird, fragile bones and all.

A cockerel should be lifted with thick protective gloves to remove him to a safe place or away from the eye of the storm. Your arms and legs shouldn’t be bare when handling the rooster, and your footwear should be sturdy too. If the cockerel is only in the early stages of aggression, he can often be calmed down with a few treats. It is a good idea to carry treats with you whenever you’re in the same place as the cockerel. After you’ve fed him a few times, he will come to associate you with treats rather than danger. The treats should be hand-offered. If you throw them down and then run away, the rooster will recognise that you’re afraid, and the problems might continue.

A more hands-on – or feet-on – method is to gently roll the cockerel over with your safely booted foot when he approaches you looking for trouble. After a few of these gentle wrestling throws, the cockerel will realise that you’re the top bird in the run and give you no more trouble. In theory, at least!

How to Lift an Angry Cockerel

Alternatively, when the cockerel tries to peck you, scoop him up with your gloved hands and hold him like you would hold a hen, under your arm. The cockerel will flap and squawk angrily, but he will eventually calm down if you ignore these protestations. This may take 10 to 15 minutes, but it’s time well spent if it means that the cockerel will not attempt to attack you again.

If the cockerel has not yet attacked, you may be able to deter him by taking a large, deliberate step towards him, looking at him as you do so. If the rooster starts to fidget and looks at the ground or starts pecking it, you have won the battle, and you can back down without fear of attack.

The key to all these methods is to make the cockerel realize that you’re not a threat to his hens. Protecting the flock is all he wants to do. If that doesn’t work, and if the cockerel starts to stretch his wings and neck ready for attack, stretch out your arms. Carrying a stick can help here, as it makes your ‘wingspan’ look even greater in the rooster’s eyes.

Treat holders and peck toys will keep your chickens entertained for hours!

What is the Most Aggressive Rooster?

Circumstantial evidence suggests that some cockerels are just born mean! In these cases, the cockerel’s instinct to protect a flock of hens is in constant overdrive. The aggression is occasionally seen when the birds are still chicks, although it is more usual for the aggression to kick in at 6 to 8 months old. Although the breed of the chicken makes a certain amount of difference, even supposedly gentle breeds can sometimes decide to take no prisoners in the chicken yard!

The most aggressive rooster breeds are said to be Aseel (allegedly the biggest bullies of all), Cornish, Leghorn, Malay, Old English Game and all other traditional ‘cockfighting’ or ‘game’ species.

What is the Least Aggressive Rooster?

The least aggressive roosters include the Australorp, Brahma, Polish, Silkie and Welsummer. Bantam breeds tend to be relatively calm, too. However, there are occasional ‘bad apples’ in all breeds, and some cockerels just seem to hit an aggressive streak and never entirely leave it behind.

Constantly aggressive roosters are a real problem, especially if you have children wandering in the garden or backyard. A cockerel readily backs up his anger with a physical attack, and he is armed with sharp spurs – the spikes on his legs – that can do real damage. If all attempts to calm the cockerel down fail, the tyrant rooster will have to be rehoused.

If you have chosen a non-aggressive breed of cockerel, and if your chickens have lots of space, you will seldom have major problems with rooster aggression. Let cockerels know whose boss as soon as they hit adulthood, never accept those tempting little gifts, and you should be recognized by all your chickens as being top of the pecking order.