Many dog owners believe their dogs enjoy a good laugh. Check out YouTube, where there is no shortage of smiling and laughing dogs!

However, can a dog laugh in the same way as a human laughs? It’s very easy to anthropomorphism animal behavior – i.e. judge everything they do from a human emotional and moral perspective – and the real question, perhaps, should by why would a dog laugh? What does it mean, and what advantage would it have given the dog’s wolf ancestors in the wild? Or is it perhaps something they have only learned to do since they were domesticated by humans?

There is no definite answer to that last question, but we do know a bit about animal laughter.

Do other animals laugh?

From a hard-nosed science point of view, the only animals that are definitely confirmed as laughing are the great apes, dolphins and lab rats. Chimpanzee laughter sounds to our ears more like a shriek, and in the wild it is linked to reassurance and the release of pressure rather than pleasure. However, a tickled chimp definitely laughs, just like a human child does.

Gorillas have been known to laugh at slapstick human behavior, suggesting that they would make a great audience at a pantomime! Orangutans are a bit more inscrutable, and their signs of laughter may be more akin to simple copying than genuine amusement. They laugh when tickled, though.

A 2004 study of dolphins found that the animals produced a sonar pulse followed by a whistle when playing. The researchers concluded that these sounds meant that the dolphins were feeling happy and relaxed in a fun, non-threatening setting, and that the ‘laugh’ prevented the rough and tumble play from escalating into violence. This is fascinating, as many psychologists believe that human laughter evolved for these exact reasons, and it ties in with those wild chimpanzee ‘laughs’ too.

The fact that you can’t make your dog laugh by tickling it doesn’t mean it can’t laugh, though.

Dog laughter – if that’s what it is – is a kind of rapid panting – a play-pant which they use to invite humans and other dogs to play. It is a hhuh sound followed by a hhah sound, and humans can impersonate it by making breathy ‘hoo-haa’ sounds. The panting will often be combined with head bows, and the dog may reach out with one of its paws too, or make little teasing jumps in your direction. This is an invitation to play rather than an expression of amusement in the human sense of laughter, though.

If you laugh at your dog using the hhuh hhah panting sound, drawing your lips back in a cheesy grin during the ‘aaa’ part, you may make your dog laugh back. It’s a great way of bonding with your furry friend!

When a dog is relaxed it often pulls back its lips, lets its tongue droop and narrows its eyes, it can sometimes – depending on the

breed – look like a smile. The fact that they pull these faces when happy and relaxed makes it an easy associated with smiling. The fact that human smiles seem to have their origins in tension-reducing body language suggests that the same might apply to dogs. The wild wolves, close cousins of the domestic dog, does indeed have a tongue-wagging facial expression linked to relaxation and submissiveness.

Intriguingly, smiles appear to be contagious among dogs, just as they are in human to human interactions. If you can’t make your dog laugh, you can certainly make it smile! Smile at your dog, and your dog may well smile back! 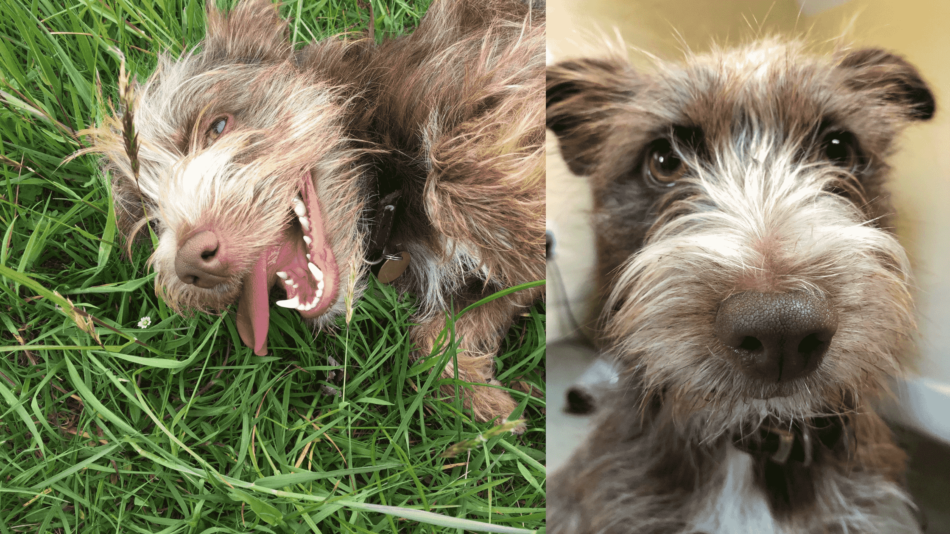 Do scientists believe that dogs can laugh?

Science is on the side of the laughing dog. In a 2005 study titled ‘Dog-laughter: Recorded playback reduces stress related behavior in shelter dogs’, it was discovered that a dog sometimes pants in a way that sounds like a laugh. When recordings of these ‘laughs’ were played to other dogs, the dogs became playful and de-stressed, as measured in stress-related behavior such as tail wagging, doggie ‘play-faces’, happy body language and lip-licking.

However, being happy, relaxed and playful is not exactly the same as laughing. There is no evidence that a dog ever finds things amusing in the same way as humans – or gorillas – do. On the contrary, slapstick behavior is more likely to startle or scare a dog.

Laughter is all about fun, though, and you can certainly have plenty of that with your dog. They readily show their emotions through sounds and body language. Take the panting and playful body language as a sign of deep friendship. And that means there’s plenty to laugh about!