Eglu Cube vs Wooden Chicken Coop: Which Will Stay Warmer? 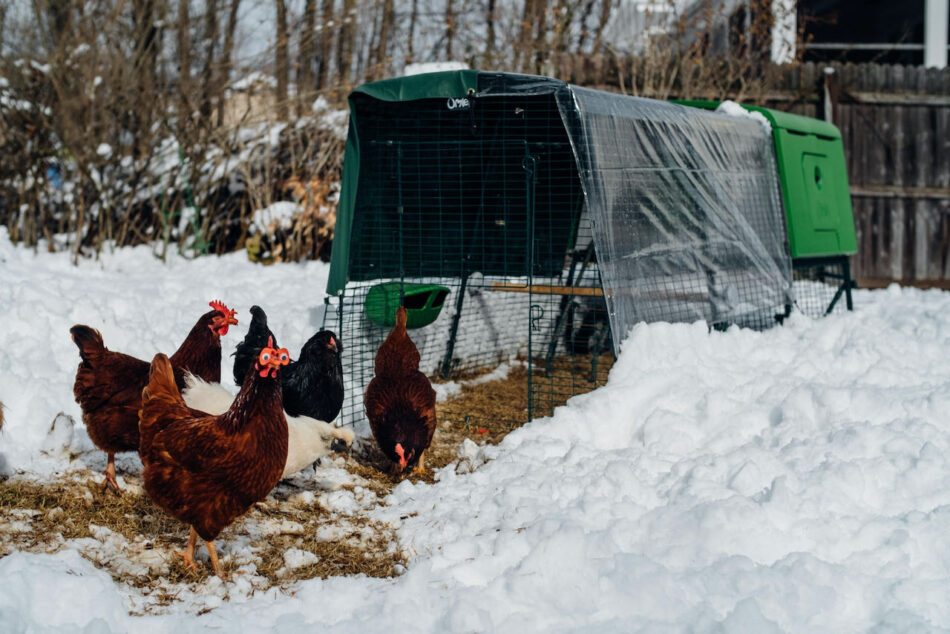 On a cold winter’s day, when there’s a heavy frost or a thick blanket of snow do you ever wonder how your chickens manage without central heating and a mug of cocoa? It’s natural to worry if your hens will be comfortable when the temperature dips below freezing.

Unsurprisingly, chickens will look for shelter when the weather’s bad so the first thing you can do to keep your chickens cosy is make sure they have a winter proof chicken coop. In this respect choosing the right chicken coop is similar to choosing your own house. You wouldn’t want drafty windows and doors, a leaky roof, and paper thin walls – and neither do your chickens. Many coops that are bought are fine during the summer, but unfortunately when winter comes they can leave their occupants shivering. We set about testing two very different chicken coops over the course of 3 nights in the Bavarian Forest in Germany. A place that gets more than its fair share of snow and ice.

The first chicken coop was typical of the type sold all over the internet. On first impressions everything fits together well and it’s attractively painted, it comes with a roosting bar and a nesting box and a run. It appears that this is a perfectly good chicken coop. However, on closer inspection it’s worrying to find that large sections of the wooden panels are only 5mm thick. There’s no insulation and nothing in the instructions regarding the suitability of the coop for year round use.

The second coop was the Eglu Cube Chicken Coop by Omlet. This chicken coop is part of the Eglu range which all feature a twin walled construction providing an insulating layer all round the coop. Similar to the way ice chests are made, it feels extremely robust and heavy duty. You could say it’s agricultural quality in a hobby chicken coop. It looks the part – but would the Eglu keep the cold out and the warm in?

Identical digital thermometers were placed inside the Eglu and the wooden coop which would take readings both inside and outside the coops during the night.  Cameras were also placed inside the coops to record the chickens. After the chickens went to bed the front doors were closed, in fact the Eglu Cube came complete with a rather fancy Automatic Chicken Coop Door which gently closed behind the last chicken.

If it was freezing inside you might be wondering how on earth the chickens survived. Chickens, as with all other warm blooded animals, have temperature-regulating mechanisms to keep their body temperature at a constant level (around 41-45℃ in a healthy adult hen), so they can cope with a certain amount of cold. Just like wild birds, chickens will fluff up their feathers when it gets cold; this traps a layer of air which insulates the chickens against the cold. This is why it’s so important that chickens don’t get wet during cold weather, as this prevents them from being able to fluff their feathers up. In addition a drafty coop will make it hard for them to trap this layer of warm air too.

They will also tuck their head under their wings and huddle together with their coop companions to keep themselves warm. On the in coop camera recording you could clearly see how the chickens select a roosting place, and then fluff up their feathers.

So if the chickens in the wooden coop were able to keep themselves warm even though it was freezing inside there’s nothing to worry about? Not quite, a coop that’s not insulated or draughty will place extra demands on your chickens because of the heat being lost. Chickens in a cold coop will have to increase their metabolism to turn food and fat reserves into heat at a faster rate than hens in a cosy coop. If the heat loss is extreme, or a chicken is not fully fit then over the course of several cold nights there is a risk that all the energy reserves are used up resulting in the chicken being unable to keep it’s body temperature high enough with potentially fatal consequences.

What this test shows is that properly insulated, winter ready chicken coop can make all the difference between a cosy night in the coop and one spent shivering to keep warm. As an added bonus hens that use up less energy keeping warm are more likely to keep laying. 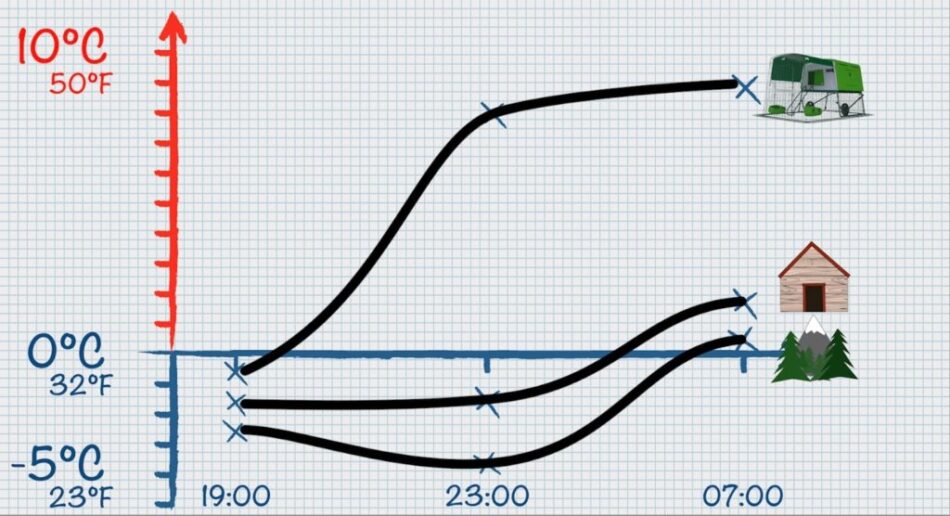 « Jo changed her wooden coop for an Eglu Go UP
WIN an accessory bundle for your new Eglu! »

One reply on “Eglu Cube vs Wooden Chicken Coop: Which Will Stay Warmer?”

Thanks for sharing this. However, can you also do the same temperature test between a wooden coop and Omlet Eglu coop in the summertime when it is really hot and share results?