How Can I Read the Body Language of My Guinea Pig? 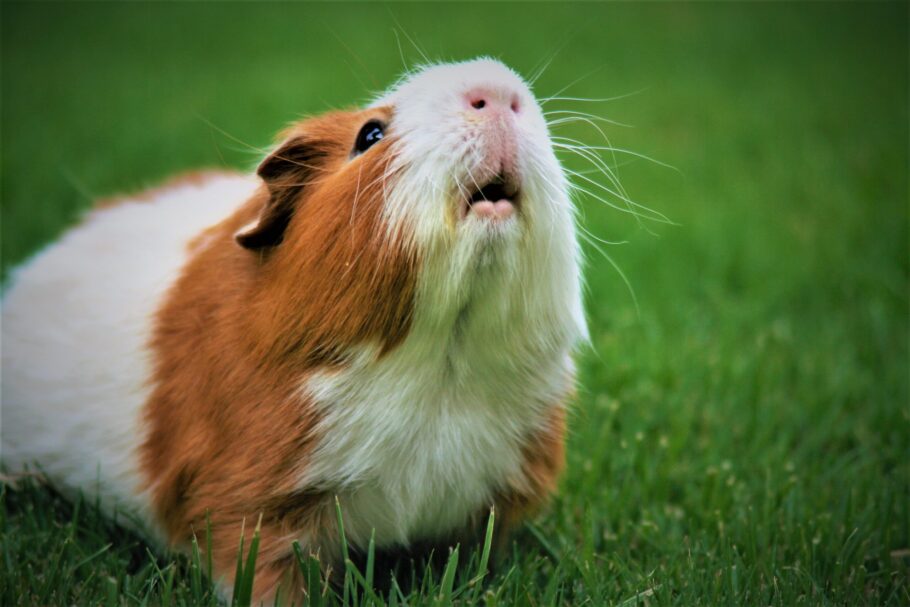 Image by Jack Catalano from Unsplash

Guinea pigs are quite popular among pet owners. They are easily the best pets for children, and it’s easy to learn cavy care. They’re adorable, cuddly, easy to keep and their minuscule droppings mean that caring and cleaning are kept to a minimum. Their small size and accessibility make them a top pick.

However, it can be hard to get to grips with the behaviors of your guinea pigs. By using sounds and postures cavies can actually say a lot. Though you may not understand all the noises and body language they sometimes make, there are things they do that have a fairly clear meaning and that can help you understand your guinea pigs.

Positive Sounds- how do you know your guinea pig feels comfortable?

Chutting: Aka “I’m having fun!”. Sometimes referred to as a “clucking” sound, like a mother hen would make, this is a sound of contentment. Your guinea pig may make this sound towards you when you’re interacting with him or her, or towards his house mates, when he enjoys the moment. Guinea pigs may also make this sound when they’re curious and exploring their surroundings. 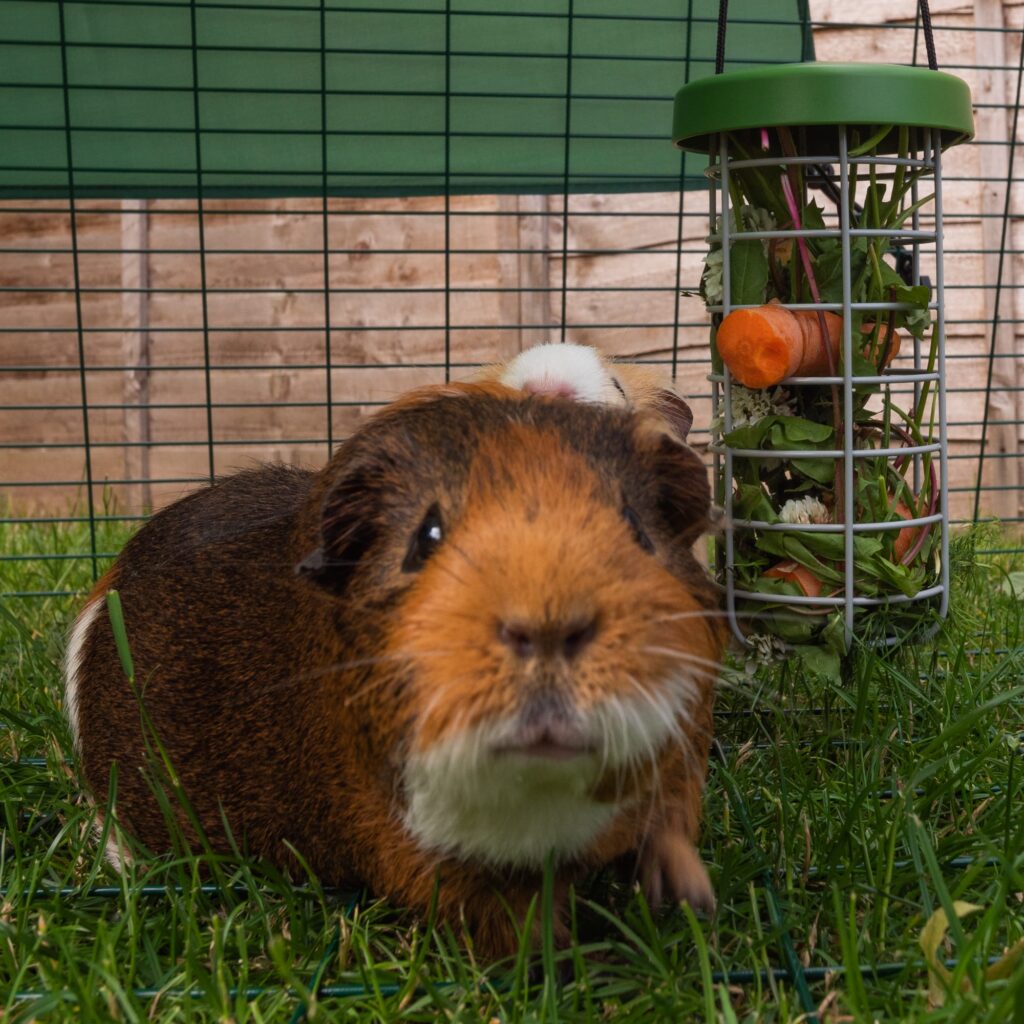 Cooing: This sound communicates reassurance in guinea pigs and is a sign of affection.

Purring: Guinea Pigs who feel content and comfortable while being pet or cuddled, will make a deep purring sound, accompanied by a relaxed, calm posture.

Snoring: Yes, you’ve heard right. Guinea pigs can snore as well. If your buddy is relaxing on your lap and snores, it means he feels comfortable. NOTE: Just to be on the safe side, if your guinea pig starts to make similar sounds to snoring or wheezing/clicking when breathing, be sure to check for any symptoms of illness.

Wheeking: Aka “Feed me!”. This is a distinctive and common vocalization made by guinea pigs and it’s most often used to communicate excitement or anticipation of getting some tasty treats when their owner opens the treat box. It sounds like a long and loud squeal or whistle.

Negative Sounds – how do you know your guinea pig feels uncomfortable?

(Teeth) Chattering: Aka “Stop that!”. This is an aggressive vocalization and shows an agitated or angry guinea pig which is ready to attack. As the name implies, teeth chattering is often accompanied by the guinea pig showing its teeth, which looks like a yawn.

Purring: If the purr is higher pitched, it’s often an indicator of annoyance and sometimes sounds like a piercing vibration. A short purr may indicate fear or uncertainty and you will notice your guinea pig remain motionless. In both circumstances, it is best to reassure your guinea pig softly.

Hissing: Like chattering, this is a sign of a guinea pig who’s angry or aggressive. It’s just like the hissing noise that a cat makes. Image by Summa from Pixabay 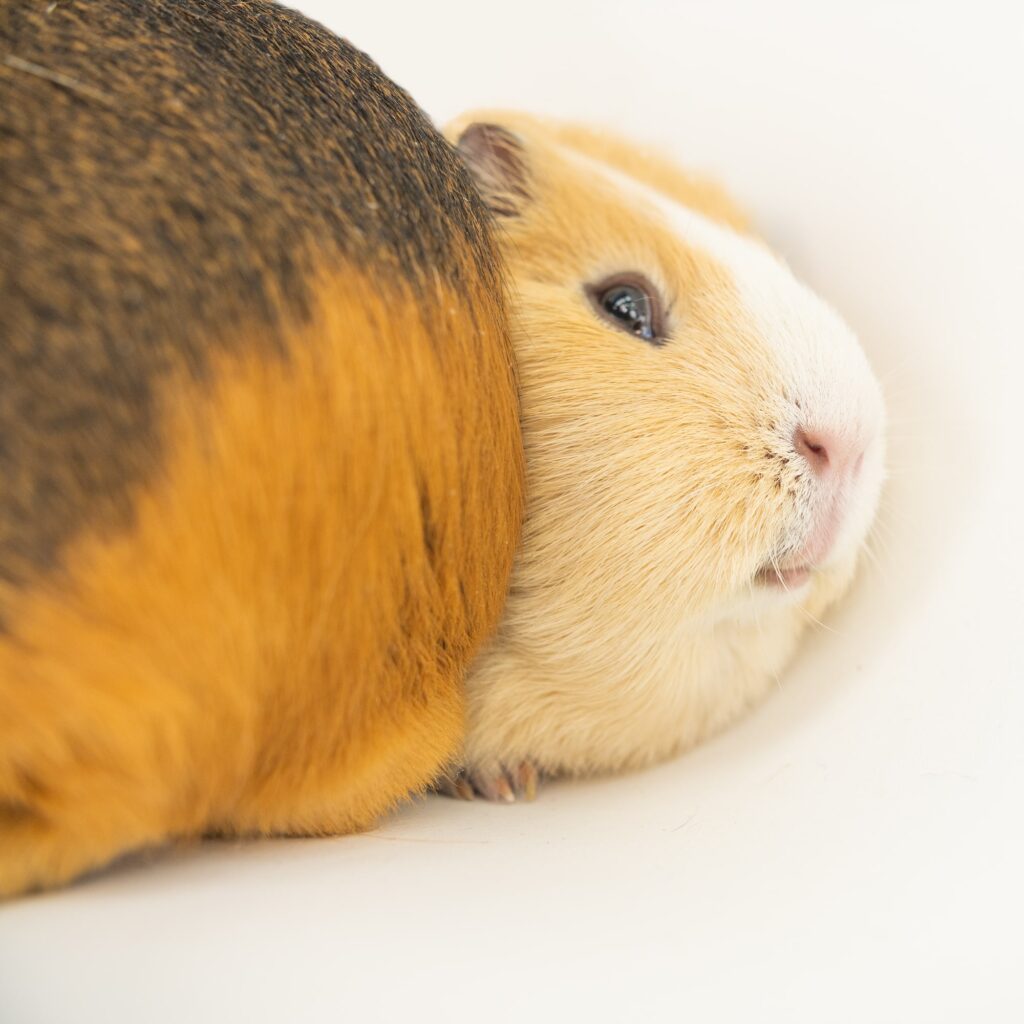 Shrieking: A piercing, high-pitched squeak called a shriek is a fairly unambiguous call of alarm in terms of fear or pain a guinea pig feels. If you hear this sound, it would be good to check on your guinea pig to make sure everything is alright and it’s not hurt.

Whining: Aka “I don’t like this.” A whining or moaning type of squeak can communicate annoyance or dislike for something you or another guinea pig is doing.

Chirping: Just like a bird, chirping is perhaps the least understood or heard noise that guinea pigs make. This sound is made when cavies are taken away from their family. A chirping guinea pig may also appear to be in a trance-like state.

Body Language – what are Positive Postures? 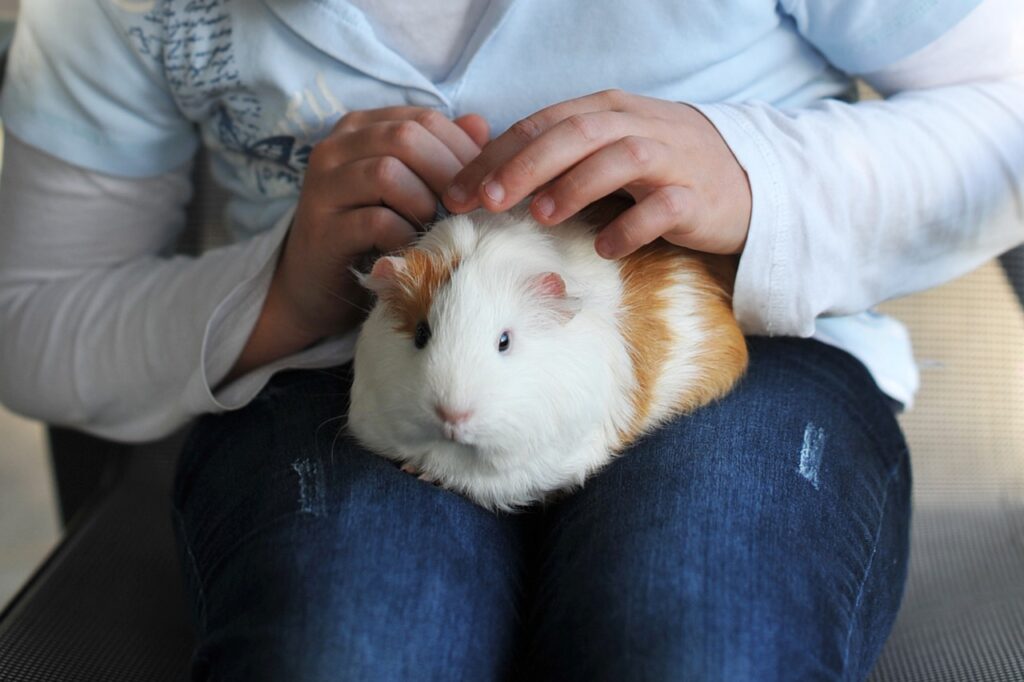 Popcorning: This gesture consists of hopping straight up in the air, sometimes repeatedly, just like popcorn does while it is popping. The usual reason is happiness and excitement. They’re simply having a good time, they become excited, and pop – they are literally jumping for joy! Not all guinea pigs entertain their owners with “popcorning”, but most of them do. For further information please refer to our previous article https://blog.omlet.us/2021/01/11/why-do-guinea-pigs-popcorn/

Photo by JennyNero from Pixabay

Body Language – what are Negative Postures? 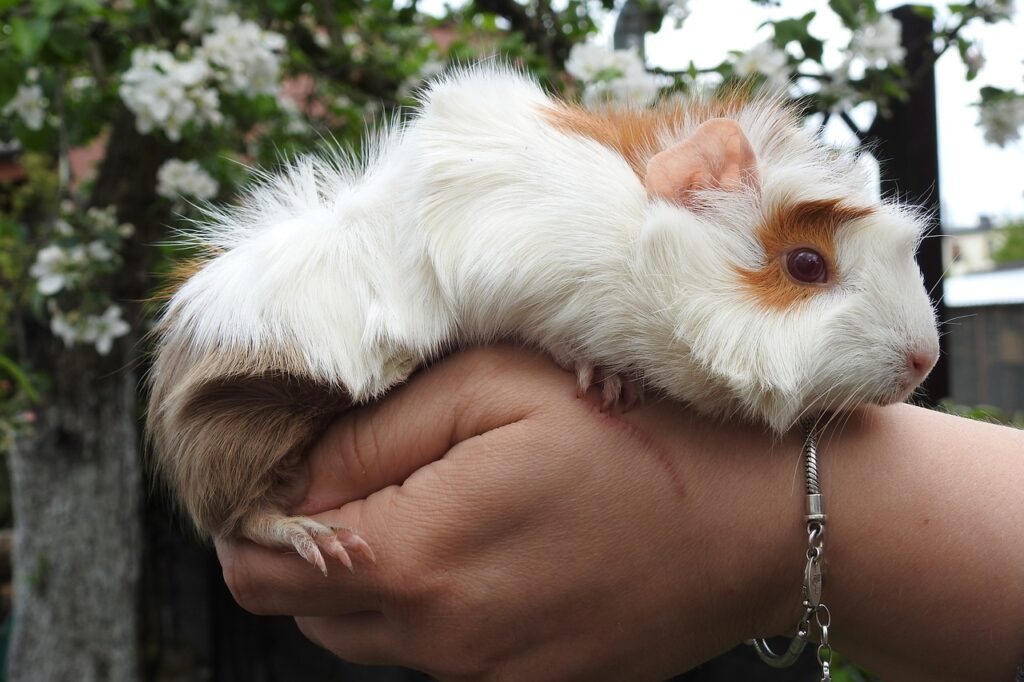 Backing away: If you’re trying to pick up your small friend and he’s backing away from you, this could be a sign that he feels threatened and uncomfortable in a way and it’s worth giving your pet some space. Guinea pigs are prey animals, so their instinct is to run away if they feel threatened.

or is just tired of being held. Either way, try returning your guinea pig to its cage for a bit.

Tossing Head in the Air: A guinea pig will toss its head back when it’s getting annoyed being pet as a way of asking you to stop.

Standing on two legs: If your cavy stands on two legs and bares its teeth, it could be a sign that a fight is about to happen among him and his friends. To prevent injuries, it may be necessary to intervene here. It is recommended and important to try and prevent this behavior if you’re introducing other guinea pigs for the first time.

What are Neutral Sounds & Postures?

Mounting: This can be either sexual behavior (males to females) or behavior used to show dominance within the guinea pig herd’s social structure, especially between females.

Scent Marking: Guinea pigs will rub their chins, cheeks, and hind ends on items they wish to mark as their space. They may also urinate on things or other friends to show their dominance. 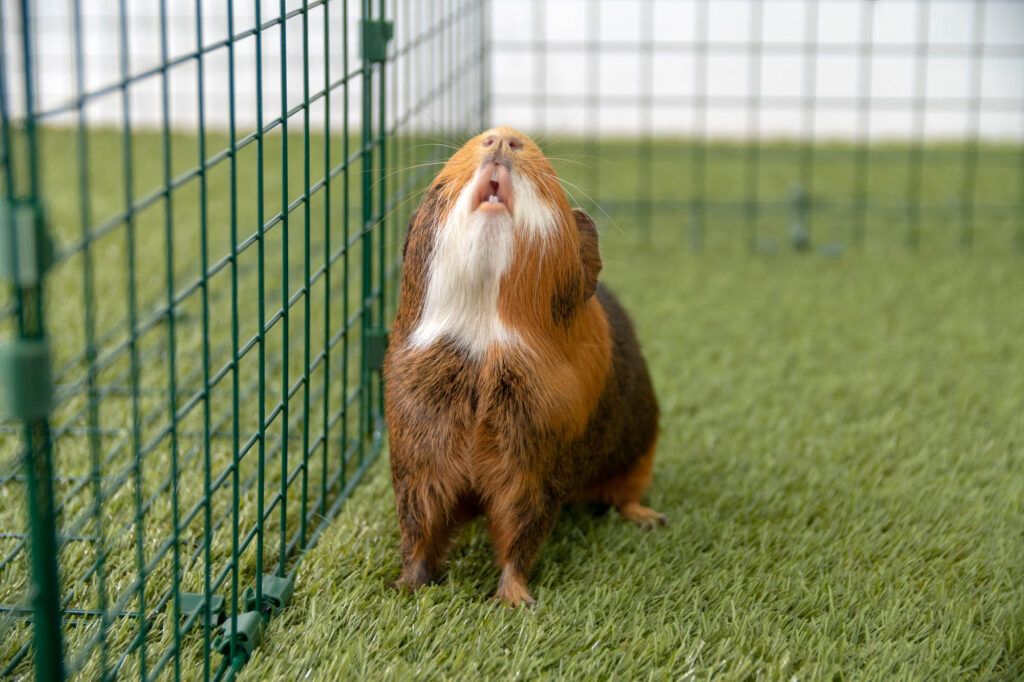 Running Away From Being Picked Up: Guinea pigs tend to be timid, especially at first. If they’re running away from you it’s not a rejection intrinsically but rather a natural defense mechanism. Just give them a bit of time and patience and they’ll be happy being picked up for cuddles and playtime outside of the cage from time to time. 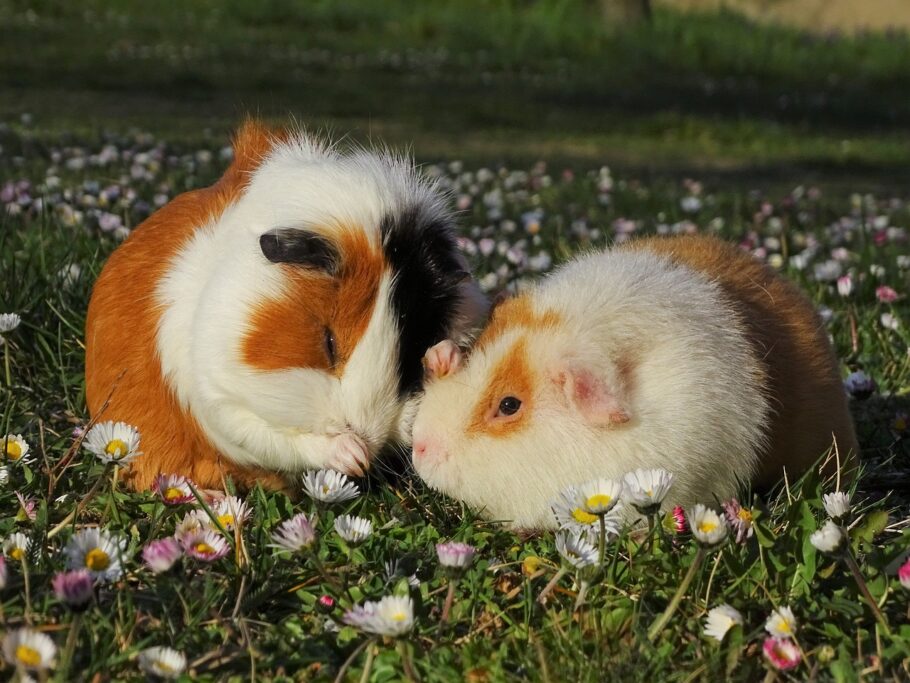 Image by Ivinne from Pixabay

Be sure to take note of your little friend‘s behaviors and after a while, you‘ll have a better understanding of it. Remember it may take a while for your fur ball to get used to being handled. Your guinea pig may interact with you differently than the way it does with its cage mates.

To give your guinea pig a happy and healthy life and in order to prevent stress or depression, socializing and playtime are important parts of a guinea pig’s life. If you want to know how to teach your fur ball some fun tricks, please visit our previous article here.

« 5 Tricks To Teach Your Dog
Pride of Omlet: The Constant Companion »